I have been larping for about 10 years now, and I have been to a few different larps. Some are very welcoming, and some don’t seem to value new players. What larps should realize is many of their players were picked on, have anxiety or are very shy, and with covid stopping larps many people are just getting back into trying to be social. Some larps that they came from didn’t survive covid. Going to a larp and not having many friends that larp is tough, if you are not part of a group you seem to be overlooked or ignored. My first larp experience was ok, I was so nervous that weekend, I barely ate anything due to my anxiety, no more then 10mins into the beginning of game I had to hide in the woods that I was unfamiliar with from someone that was hunting elves. If that larp would have given a bit of a rundown on what has been happening or explained the story line for the new players it would help them, not going in blind or perhaps decide not to play that species. I stayed with that larp for about 5 years had some great memories and some bad ones at the end before I moved on. The next larp I went to was very friendly they were nice to new players and made them feel included since it was a small larp.

But unfortunately, that larp didn’t survive covid. The new larp that I started playing like most games if you don’t really know anyone, you may find yourself not being included. My first game there, a few people talked to me. I went for a walk and got the lay of the land. There was a battle at night that I love and thrive on. The next game there was a new player who I helped get resources and tried to make his game more fun. By teaching him how to search for rings which are resources in game and taking him on a tour of site to show him were important things are and what they do. The past event was all politics, I was barely talked to, and I felt like I wasn’t included in any discussions. Some examples of where things went wrong, and where I was left out were. One mod that I went on there were too many people. We were supposed to get to a fae that was in a room, but there were too many people so that we all could not fit into the room. I never even saw the inside of the room because I was on the outside, stuck behind a wall of players. Another example is when a player asked me to come to theorize on what to do about the political situation, we went into a small hallway with a small group of people but after less than a minute another person took all the people away to talk about the subject but did not include me. It was embarrassing to ask me to come one minute then reject me the next. There was a Masque Ball with dancing, I was feeling very shy and not part of the scene at this point of the game. It would have been a big help if a npc came to talk to everyone to see if they are doing ok and if they needed a dance partner.

How can your game help, and make new players feel more welcome and want to come back to game? Talk to them, make sure people are included in at least one mod where they can shine and have their moment. People such as myself are very shy, and it would help greatly if there was a npc to ask if I was enjoying myself and I felt included and to explain things if I did not understand what was going on. People also need to be careful including others and not remove others form the group or at least explain why they are removing them from the group. Games have to be careful, to have a good ratio of npcs to pcs to insure no one is left out. Have mods for everyone’s interests some people love combat, some love politics, and some just love just role-playing. New players are your legacy, remember if you don’t make new players feel welcome your larp may fail. Remember to be kind to one another, make others feel welcome. Larp is a group effort let us build a stronger community together that we all can enjoy. 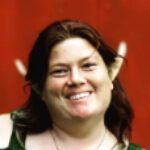 Thinking Outside the Box

Robin in the Hood Medieval Festival

Will LARP survive the upcoming pandemic?